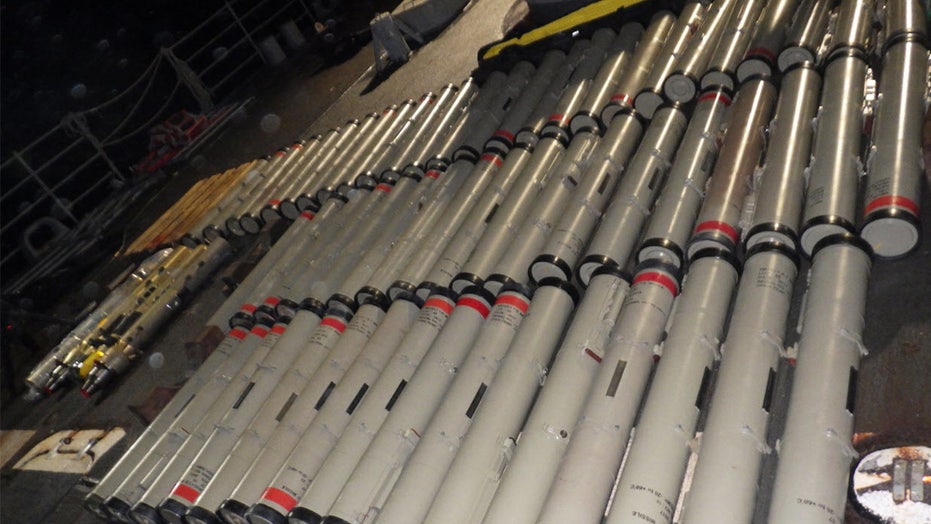 U.S. officials have confirmed to Fox News Thursday that a U.S. Navy warship intercepted Iranian-made weapons from a vessel in the Arabian Sea earlier this week.

Crew members from the USS Normandy seized a huge cache of weapons from a dhow – a small vessel with lateen sails – on Sunday while conducting maritime security operations in the U.S. Central area of operations.

The weapons and weapon components were intended for the Iranian-backed Houthi rebels in Yemen, according to officials.

The crew of the USS Normandy seized an illicit shipment of advanced weapons and weapon components intended for the Houthis in Yemen, aboard a dhow during a maritime interdiction operation in the U.S. Fifth Fleet area of operations, Feb. 9, 2020. (U.S. Navy photo by Mass Communication Specialist 2nd Class Michael H. Lehman)

Among the weapons seized were 150 “Dehlavieh” anti-tank guided missiles (ATGM), which are Iranian-manufactured copies of Russian Kornet ATGMs.

Other weapons were also Iranian design and manufacture, including three surface-to-air missiles, thermal imaging weapon scopes, components for unmanned aerial and surface vessels, as well as other munitions and advanced weapons parts.

Many of the weapons were identical to those seized by the USS Forest Sherman in the Arabian Sea in November. Those weapons were also determined to be of Iranian origin and assessed to be destined for the Houthis in Yemen – a violation of UN Security Council Resolution that prohibits direct or indict supply, sale, or transfer of weapons to the Houthis.

The weapons seized Sunday are now in U.S. custody awaiting final disposition. The assessment of the material will be an interagency and international effort. International partner nations and organizations have also been invited to inspect the cache.

The operation is ongoing, and further information will be shared as it becomes available.